In the coming weeks the schoolboy section of College Corinthians AFC will be organising Street Leagues for the Under Six to Under Ten age groups. The Leagues are always the highlight of the schoolboy season in Corinthians with last year some thirty teams and over three hundred schoolboys and girls taking part. This years leagues will be open to boys and girls born between 2005 and 2009 and will start in mid to late April culminating in a Finals Day in mid June. 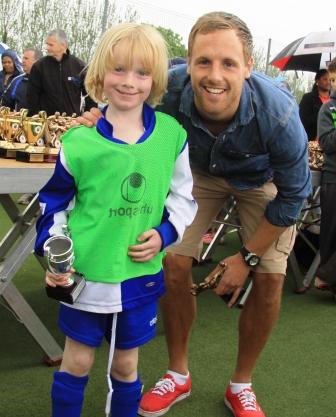 This year the theme for the Summer Street Leagues will be the top Leagues across Europe with teams  in each age group named after Club sides from a particular European League. So for example in the Under 8 League teams will be called after Clubs in the English Premier League (Man Utd., Chelsea, Arsenal etc.), the Under 9 League will be based on La Liga the Spanish League (Barcelona, Real Madrid, Valencia etc.) the Under 10 league will be based on Serie A the Italian League (Juventus, AC Milan, Inter Milan etc.)

Registration for this year’s Street Leagues will take place on Saturdays April 11th & 18th from 12.30pm to 2.00pm at the Clubs grounds in Castletreasure. Existing members do not have to register. For further information you can contact one of the following Terry O' Donovan at  087 / 4181881) – Neil Daly at   ( 086 / 8598907 ) or check out the Club’s website @ www.collegecorinthians.com ( look under Finals Day, Street Leagues, Photo Gallery )

d love to see new members coming up to play in the leagues, which are open to all. There is always a special welcome for our under six and under seven players many of whom are coming up to Corinthians for the first time. Our Under Six and under Seven League are undoubtedly an ideal starting point for any young

budding “Ronaldo, Hazard, Messi or Wayne Rooney “, the games are fun filled with the emphasis very much on enjoyment. So if you were born in 2008 / 2009, why not come along, we would love to see you in Corinthians.